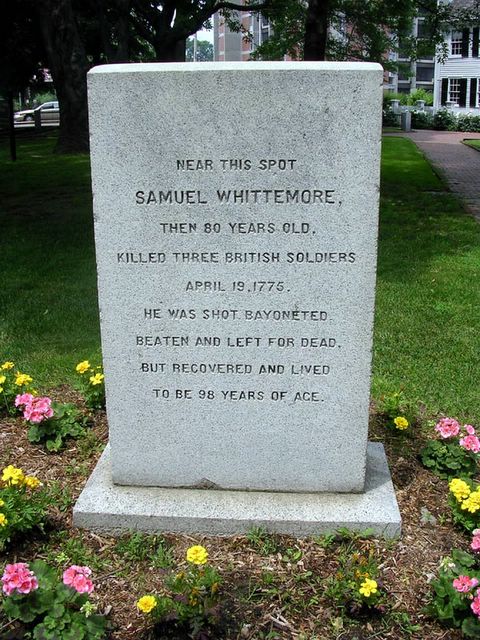 I was cleaning out my office and papers over the weekend, and came across a card that I wrote about eleven years ago. I was working in the Boston area, and in the evenings I liked to explore around.

I always had a passion for the American revolution. Growing up near Philadelphia only made it easier to indulge in a subject that already suited my anti-tyranical and libertarian leanings.

One night I was walking in Arlington, Massachusetts. Arlington is one of the small towns just outside Boston, near Lexington, Concord, and other towns that collectively were the birthplace of the American Revolution.

I walked by a park, and noticed a stone monument. It read:

“Samuel Whittemore, then eighty years old, killed three British soldiers, April 19, 1775. He was shot, bayoneted, beaten, and left for dead, but recovered, and lived to be ninety-eight years of age.”

After reading, I couldn’t help but blurt out aloud: “Now that’s a Man!” I took out a 3×5 card and wrote down the inscription.

It’s these things that capture my imagination. Think about it: Here is a man, eighty years old in 1775. Eighty. 1775. What does that mean in those days? No walkers. No Meals on Wheels. Wooden teeth, if any at all. No Lipitor or Geritol. If you were sick, they bled you or gave you some other Ungodly “treatment.” No antibiotics. No ice! No knowledge of clean hands before surgery, nor of using any kind of antiseptics — “antiseptic” was not even a word. He was shot. Beaten. Bayoneted! And lived. My God. He died at ninety-eight! I want his genes!

On top of that, I had this picture in my head of an old fart with a trusty flint-lock taking aim those red-coated soldiers, muttering as he was firing “take that, you British bastards! Get the hell off of my land!” I could hear him say after the last bayonet jabbed him “it’s only a flesh wound! Come back here you cowards!”

If you put this guy in a movie, no one would believe it. What a man!

As I started this post, I decided to Google him — and what a story. Turns out he was the oldest combatant in the Revolutionary War. April 19, 1775 was the first day of the Revolution — the shot heard round the world was shot that morning in Concord.

You know, it is important to remember that this country is not here by accident, that it took a lot of guts and blood to establish the USA and keep it here. The US has had many faults and sins, but they are faults and sins against a standard no other country even advocates, let alone adheres to. When we had slavery, we also had the Declaration of Independence, which states that all men are created equal. The lofty idealism of the Declaration beat out the base cruelty of slavery. There are people and interests from across the political spectrum that take shots at the Constitution, from universities enacting speech codes to cities enacting gun control to presidents suspending habeas corpus. Despite the onslaught, the rights remain, because they are so ingrained in our collective psyche as Americans and because we are diligent about pointing out and eradicating transgressions against them. So here’s Sam Whittemore, at the dawn of our country, showing what it took to get it done and get this standard established. We need to keep that in mind.